In the image, the process of the workflow (PC1 Workflow) can be seen. It uses two different images and two different headers to produce the Artifact “Atlas X Graphic” (on the bottom of the figure), which is also derived from all the used artifacts. The process is controlled by the Agent “John Doe”.

Process PC1 could have also its own steps, but to simplify the example they are not included.

The xml serialization of the example can be seen here.

Other examples of OPM

There are many applications made for exporting OPM Graphs (Taverna, Vistrails, Swift, Karma or Kepler), toolkits for creating and manipulating them (Karma, OPMToolbox, Tupelo), and applications that uses the model to actually model real data (like OurSpaces and eBioFlow, where the model is used, but the data is not shared).

(We will update this section as we find more uses of OPM.)

Trying to Model the europeana example with OPM.

OPM does not fit well for the purpose of the example proposed by Kai here. OPM has been designed to capture the evolution of the artifacts at an abstract level rather than their concrete meta-metadata. For example, in the context of the previous example (tracking of paintings), OPM would fit well if the painting went through a rstoring process: 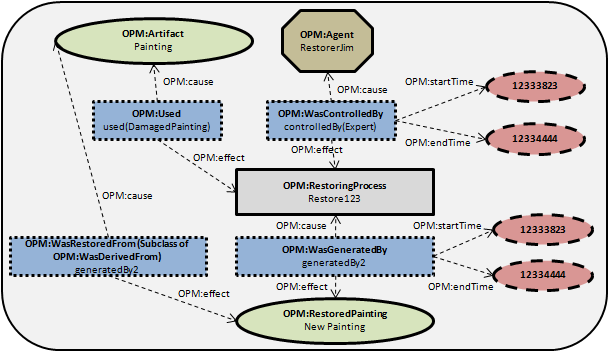 In this example, OPM models how the restoring process is captured, who is the agent responsible for the restoration and when he starts and finishes the work. The resultant artifact is the same painting restored. The roles have been included in brackets (restorer, damaged painting, etc).